The liars - The poisoned present - The three little Moonkys

Left alone in the stump the three little ones disobey Zilbou by playing in his lab, where they break a small pot and the mushroom that was in it.

Left alone in the stump the three little ones disobey Zilbou by playing in his lab, where they break a small pot and the mushroom that was in it. They try to hide the damage, find a similar mushroom and put it in another pot. But Zilbou immediately notices that something is wrong in the lab. The little ones start telling a cock-and-bull story. 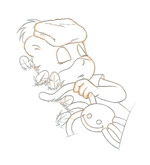 Luna is sick and her friends want to offer her a present. Monk remembers that Luna was fascinated by the beautiful luminescent mushroom at the very end of the mushroom bed and decides to get it for her. At the same time in the lab, Zilbou, Champy and Bard are getting ready to pick the most dangerous mushroom from the mushroom bed. The very one that Sol and Monk are picking. The elders realise that the little Moonkys have taken the poisoned mushroom and start looking for them. Sol and Monk arrive at Luna’s bedside with their “present”.

Karnax all of a sudden wants to eat some mushrooms. As he knows that the little Moonkys are alone in the stump, he tries to get in. Karnax first tries trickery, then strength, disguises … and despite the great thrill he gives the Moonkys, his hate and the stupidity of Kasimolo will ruin his efforts.

Welcome | Contact | Who are the Moonkys ? | The series | The 'special' Christmas | Français | Nederlands | Admin
© The Moonkys Company